This post may contain affiliate links and images. If you click through a link or an image, and make a purchase, I may receive a commission at no additional cost to you. Please read my Privacy Policy for more information. Thank you for your support!

I am pretty sure that many of you can relate to those nagging, deep-rooted fears that creep up when you’re dating someone.

Here’s are a few examples of some of my totally unhelpful, self-defeating thoughts:

I hope he isn’t turned off by my big hair.

Maybe he won’t notice how big my thighs are in these jeans.

Will he think I’m too religious if I tell him about my relationship with God?

Will he even call after this? Will there be a second date?

These are my real thoughts.

It doesn’t matter that the guy approached me, asked for my phone number, called, and asked for a date. I still have these feelings of inadequacy.

This tells me that my fears have less to do with the guy and more to do with me. Despite knowing this, I still struggle with fear when it comes to dating.

Running Out of Time

It’s no secret that people are getting married later in life. A Woman’s Health article discusses 2017 Census estimates of average age of marriage:

This fact can either bring reassurance to younger women or incite panic in older women. And, by older, I mean late 20s and beyond.

Generally speaking, I have no hangups about my age. At the time I’m writing this post, I am 39 years old and proud of it!

I am healthy, and God has blessed me in so many ways. And, I will continue to thrive as I wait for God’s purposes to be revealed in my life.

However, when it comes to dating and relationships, I allow society to convince me that my time is running out. I am well beyond the average age of marriage and have never been married.

I worry that men aren’t looking for women who are pushing 40, preferring vibrant 20-something women instead. This thinking often causes me to go into dating with fear, even desperation, instead of hope and optimism.

In an effort to avoid unnecessary worry, here are 5 behaviors I’ve adopted in my personal dating life.

According to current numbers, there are 7.4 billion people in the world. That’s a lot of people.

Although I know that, odds are, there is an abundance of eligible, single Christian men out there, I have adopted a scarcity mindset.

You know. It’s the belief that there isn’t enough of something to go around. For single women, that something is single men.

Have you ever said to yourself, or your girlfriends, “all of the good ones are taken!”

I’ve had conversations with my single girlfriends about how there are no quality men out there these days.

If that isn’t negative and hopeless thinking, I don’t know what is. It certainly isn’t helpful in any way.

Just like worrying about time running out, scarcity thinking also breeds desperation when it comes to dating. It can cause single women like you and me to run off a guy with potential.

Or, even worse, we end up attracting men who can spot a desperate woman a mile away because they’re looking for someone to take advantage of.

Practice optimism by believing that there are plenty of eligible men out there ready to meet you. One day, when the time is right, you’ll connect with the one who is meant for you!

Tip # 2 Realize A Date Is Just A Date

The reality is that a date is, well…just a date.

Yes, I know that many people say that you should date with the intention of marriage. I think this is especially true with Christians. Some of us reject the idea dating without purpose.

I get it. I became a Christian in my early 20s and also believed that the sole purpose of dating or courting was to identify my husband. As I got older, I realized that this was not only faulty thinking, it was also risky.

In the beginning stages of dating, your focus should be on just getting to know someone. What are his interests? Does he share similar life goals? Even if he is a Christian, you should still be taking the time to discover these things.

Just because you both love Jesus does not mean you’re compatible.

Dating also allows you to learn more about yourself. What do you really want in a partner? What are your deal-breakers?

Often times, you don’t know these things until you encounter them in the person, or persons, you are dating.

In recent years, I’ve learned to just enjoy the process of getting to know new people, instead of seeing every prospect as a potential mate.

Tip # 3 Remember Rejection Is Not A Measure Of My Worth

Rejection is one of the hardest parts about dating. It’s almost certain that everyone will experience it at some point.

I’ve had dates that I thought went really well. Good conversation, with the guy suggesting another date.

Then, nothing. No text, no call, nothing.

This has always been challenging for me because I tend to automatically think that I said or did something to cause a guy to stop contacting me.

Maybe he noticed something about me, physical or otherwise, that turned him off. Or, maybe he was into someone else more than me.

Any of the above could be true. But, you know what? It doesn’t matter.

A man’s decision to stop communicating with me says nothing about me. It’s about him. His choice. It does not determine my worth or value.

Same goes for you. Who you are, especially as a child of God, has nothing to do with someone else’s opinion of you.

Remembering this helps me to avoid taking rejection personally.

Okay, I honestly can’t believe I’m even writing this.

If you knew me, you’d know that I used to be against dating multiple men simultaneously.

Even though I was totally single and unattached, I felt like I was being dishonest or ‘playing the field’ by seeing different guys at the same time. I was always honest with them, but still felt guilty.

Then, a good friend set me straight. By putting all my eggs in one basket, she told me that I was limiting myself, decreasing my odds of meeting a great guy, and setting myself up for disappointment. I have to admit that she was right.

As hard as it is to accept, dating really is a numbers game. The more men you date, the better odds that one of them will be a good match.

Focusing all of your attention on a guy you barely know, or a guy who hasn’t committed to you, leads to unnecessary worry and anxiety. You obsess over him, constantly waiting on his call, or invite for another date.

The number of men you date at the same time is up to you. While I’m not comfortable dating more than 2 men at once, you may be comfortable with a higher number.

One thing to keep in mind is that you only have so much time in a week or month. Dating too many men may become tiresome and overwhelming. It may also prevent you from getting to know any of them on a deeper level.

If you desire a committed relationship, you won’t be dating multiple men indefinitely. After several dates, you will ideally connect with one guy and focus on getting to know him on a deeper level.

Tip # 5 Keep It Light In the Beginning

As much as you may want to quickly connect with a new guy, it is important to keep things light in the early stages.

Sharing too much too soon may create a false sense of intimacy, which in turn clouds your judgment in the early dating stages. It may also lead to rushing into a relationship with a man you barely know. This creates undue stress and anxiety, robbing you of a positive dating experience.

Keeping it light doesn’t mean having superficial conversations. It means that you don’t disclose too much about yourself, or ask too many personal questions, early on in dating. Details about past relationships, your financial situation, and family secrets should be saved for later, when you are moving toward exclusivity with a man.

Real intimacy and connection take time. Trust the dating process and allow yourself time to get to know someone. It will be worth it!

Identifying the root of my fears and being intentional about how I approach dating has really changed my perspective.

Instead of worrying, I’m much more optimistic and hopeful, looking forward to the process of getting to know someone new.

What are your dating fears? How are you planning to overcome them? Let’s talk about it!

Previous Post: « How to Save Money On Groceries With Inventory Meal Planning
Next Post: 5 Brilliant Reasons To Use The Library For Personal Development » 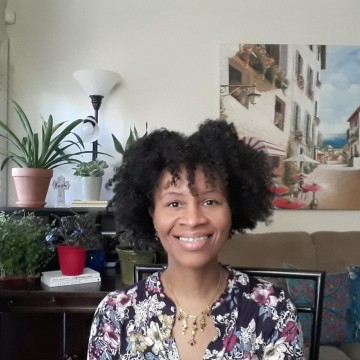